What can I say about the UltraRunners except that they are a great bunch of people to run with?

At the starting line. 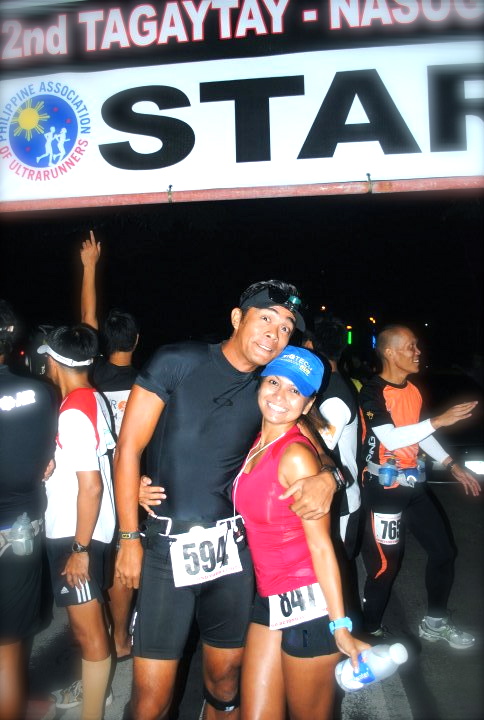 With KB Runner, who just promised to train me for BDM 102 next year.

People with good hearts, most of them. I lost my support somewhere after KM12 and for a while there I thought I was going to collapse due to dehydration (my Lightwater only had about a sip left) when I saw this other support crew up ahead and they graciously offered me water and a banana. The kind gesture would be repeated several times after that, by many other support teams.

Lightwater and no other.

With my pacer, Lao of Fairview Runners

Thinking about it now actually makes me smile and teary-eyed at the same time. Lovely people you guys are! I don’t know some of you but I hope you know how much you guys have helped me get through the race and all the way to a podium finish – and for that, I am truly, sincerely grateful. I survived all 50km with just 3 bananas + 2 slices of apple + 5 refills of water – all coming from various support teams, some of them stranger to me. That and a whole lot of heart, courage, and pride. I keep telling myself I will not DNF, never again. 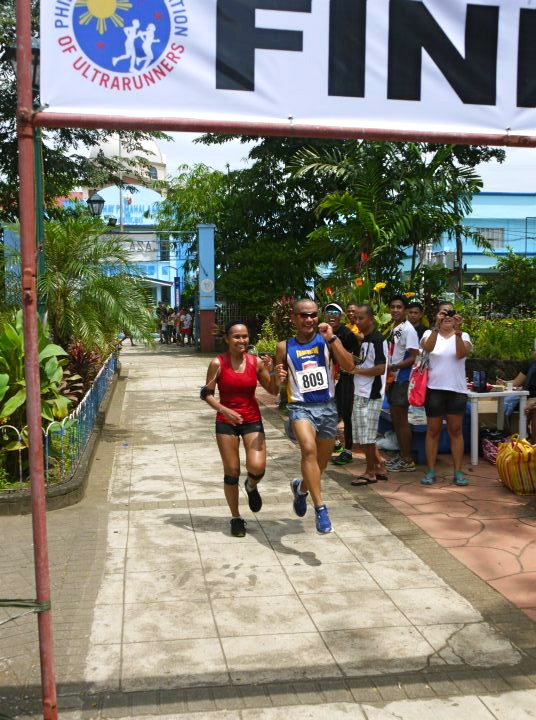 To Chaddy, who drove all the way to Nasugbu to trail me and have lunch and Mochiko with me post-race, you are one sweet angel! To the Fairview runners, especially the guy who paced me – Lao Ogerio (I’m so sorry I forgot your name! I’m really really really bad with names, I swear! Good thing you tagged yourself in one of the photos.) in the dying 12km stretch of the race, thank you! Your pananakot na may babae na runner sa likod ko who might be a threat to my bid for a 2nd place finish (kahit malayong-malayo naman pala!) actually made me forget about my tired feet and burned skin and soldier on with renewed spring in each stride. Ayoko kase ng nauunahan pa, especially when I know I have earned my spot and earned it well. That’s how wildly competitve I can be. Dennis Ravanzo knows that about me. Right, Dhenz? 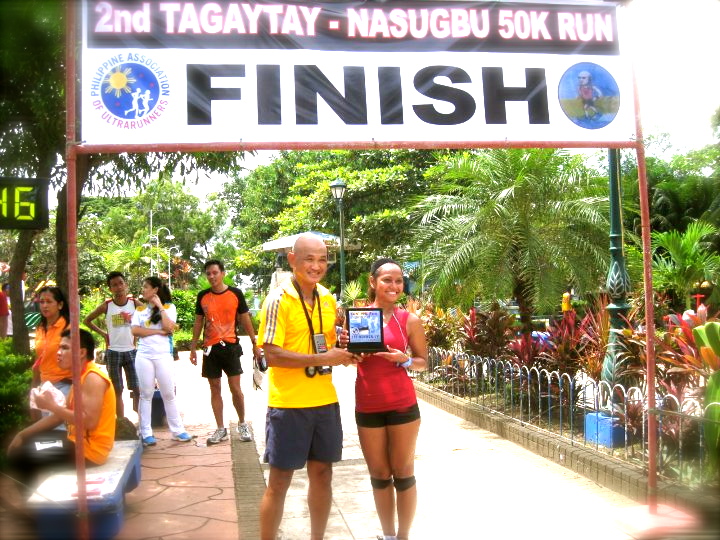 Landing a podium finish at an ultra marathon is always lovelier the second time around... 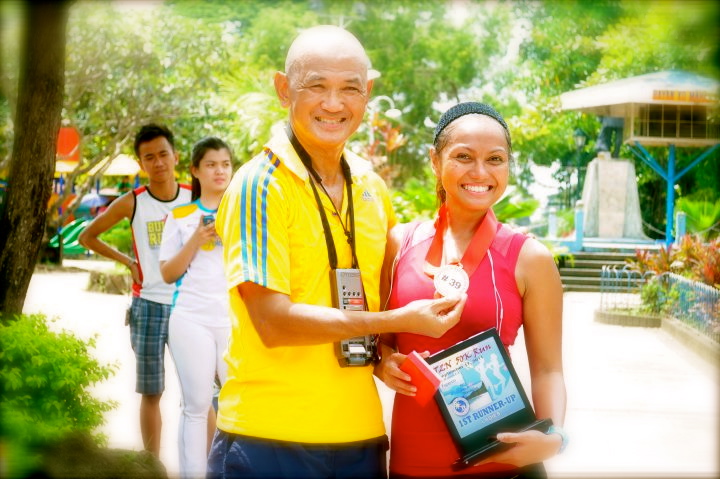 Sir Jovie aka BaldRunner said I look so much different from the Vicky who DNF'd at the BDM Test Run last year.

Before the race, I was aiming for a sub-8 finish. I crossed the Finish Line in 5:45:50! And the best part about it is that I suffered nary an injury or discomfort – not even a dead toenail, which, by the way, I am known to collect after a long run. Alam na alam yan ng pedicurista ko who’d often tease me for having un-sexy feet because of the weird bone protruding on my right foot, and the mainstay dead toenail. Just tired legs which disappeared when I woke up after 12 hours of sleep – the tiredness on my legs, I mean. I still have my ultralegs intact, haha. ‘Claudia’ did a fantastic job of protecting me from running injuries while giving me that awesome spring in my stride. Having said that, thank you again to all of you.

Official results placed me 2nd among female runners and 39th out of 202 runners!

This would be the second time I landed a podium finish in an ultramarathon. The first one was at the 1st PAU Mt. Pinatubo 50k Trail Challenge, my ultra debut incidentally, where I also finished second but got my cherry popped in a somewhat violent way. I remember coming down with fever when reached home after the race, sporting two dead toenails for weeks, and nursing a limp for the next two days. But what I like most about Bald Runner’s ultra marathons, is how they are all about courage and pride sans the glitter of cash prizes that seduce most runners these days. In this case, it’s just you and the long stretch of road ahead and how tough your gut is. This T2N  race for example was made even more exciting by the myriad of close calls I miraculously survived! I think this was the only race where I prayed the hardest, while pounding the road, from start to finish. I was nearly sideswiped by a bus and a truck  somewhere between Tagaytay and Nasugbu and got chased after by stray dogs, as well.

Unlike my Mt. Pinatubo debut, I sort of trained for T2N by running an average of 15k every morning, Monday to Friday, and at least 20k on Saturday for two weeks prior to the big race. Though my training got interrupted for a few days when I went on a business trip to Singapore, I made sure to pick up the slack soon as I got back. I was also able to slot-in two Insanity sessions for added core power. 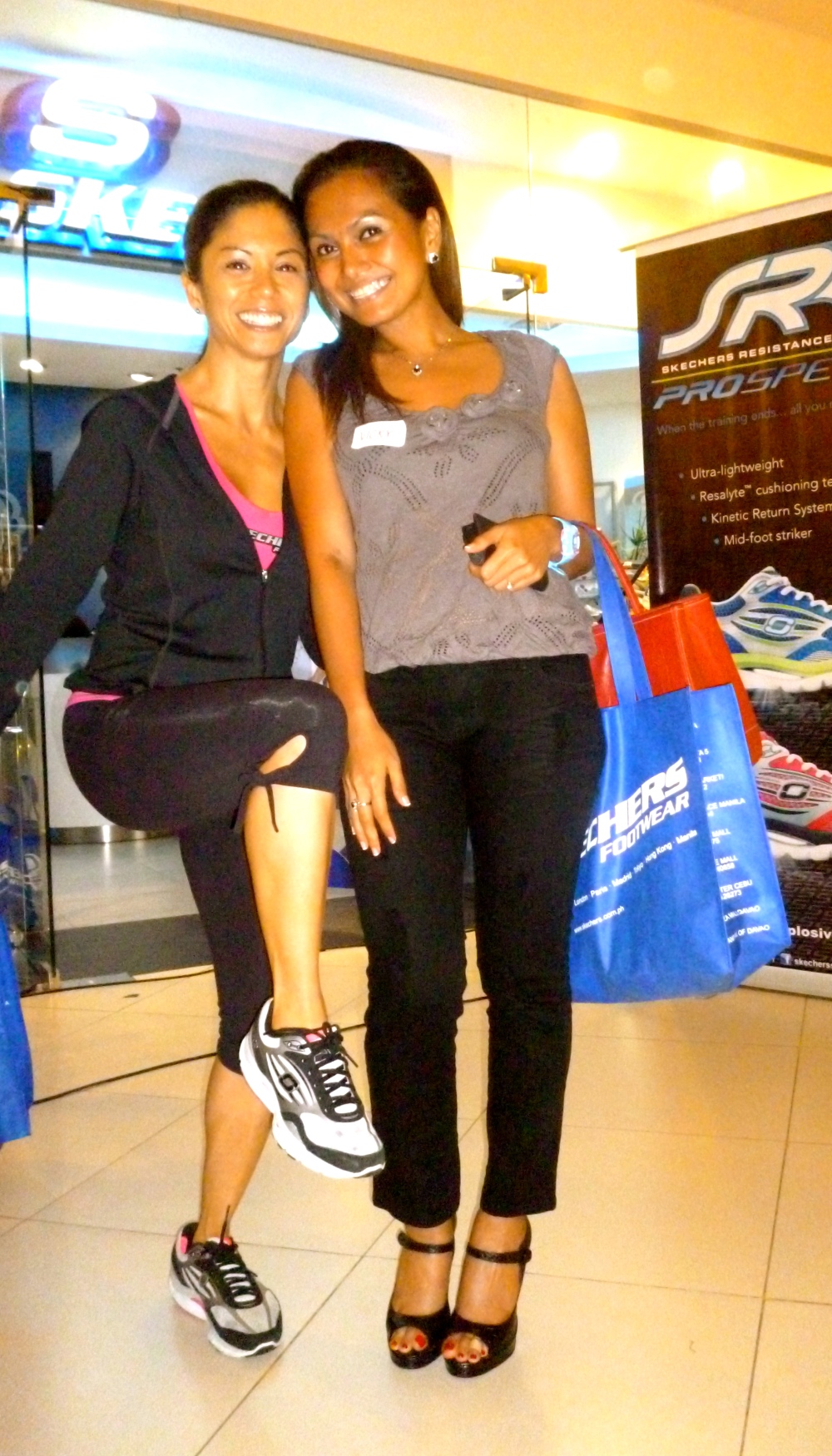 The week leading up to the race also found me getting actively involved in the Reebok EasyTone and FTW launch – both turned out to be a superlative success – and I also dropped by Skechers ProSpeed Bloggers’ event the night before the race, where I met Coach Chinggay Andrada of the Pinoy Biggest Loser fame. She’s so petite and lovely, I’m even more inspired to get fitter and stronger – looking hotter would just be an added bonus.:)

Thank you, too, Reebok, Bodivance, Lightwater, Chris Sports, and FTW magazine for your support. I am indebted and in awe.:)

And Lord God, you are awesome beyond words. Every single moment of the day.:)