See, the thing with blogging is that you have to be committed to posting updates, which, in this technology-driven age is not such a tough feat to accomplish. However, seeing as I have not exactly touched my blog since Davao, I’m a bit hesitant now to label myself a blogger. Nope, not simply as one who’d talk about having eggs for breakfast and picking up stuff at the dry cleaners after, but someone, I hope, who makes just the slightest bit of sense when she posts something. If not that, then at least someone the grammar nazis out there would not want to hang upside down and flog a hundred times until blood is spilt.

So where was I these past few weeks? 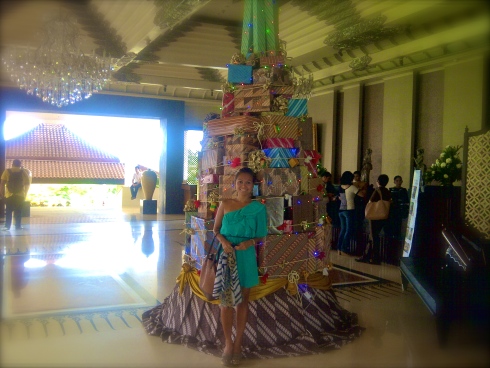 Let’s see, there’s work and whole lot of it going on. There’s a bit of travel and a whole lot of fun both of it turned out to be. And then there’s Christmas, of course, and how over here in Singapore where I spent it, was quite sedate because of the gloomy and oft-rainy weather running a stretch of over two weeks now I’ve been told; but still, it was a lovely celebration punctuated by a dollop of excitement as the two of us ran around hunting for the elusive raclette grill and the cheese itself.

And then there’s the mad drive to raise funds internally, in our company, for the devastated families in Cagayan de Oro and nearby areas because of Typhoon Sendong. The drive which began in the morning of Christmas Eve, I am very proud to say, has come up to a 5-digit collective monetary donation — in greenback! There’s really no stopping the power of Jesus when he moves and touches the heart of people with such power as one cannot deny  or refute. The outpouring of pledges from nearly everyone at work was uplifting beyond words and I am proud to be in the company of such an amazing bunch of people.

Speaking of Christmas, did you know that Epson Philippines Corporation (EPC) has recently launched its regional photography contest – the Epson Color Imaging Contest 2011? Themed “Beautiful Philippines,” the contest encourages photography enthusiasts to explore the beauty of our country from various aspects – human, landscape, nature and architecture. The contest is open to all amateur and professional photographers aged 18 years and above who are residents of the Philippines.

For those of you who are interested to join the contest, visit www.facebook.com/EpsonCICPhilippines and submit your original and unpublished photos through the Epson CIC contest application, which you will find in the left hand column of the Facebook Page. A registered contestant may only make ONE (1) submission of up to a maximum of three (3) Entries.

I’ve heard that this is the 18th consecutive annual Epson Color Imaging photo contest, jointly organized by Epson sales subsidiaries in Asia, and the very first to be held online via Facebook to appeal to a younger and net-savvy audience.

The photography contest will last for eight weeks from November 7 to December 31 on Facebook, so if you happen to be in front of your computer now, cyberstalking your Ex and his/her new squeeze or just posting photos of yourself in various states of holiday drunken stupor, why not post your entry and actually have a  shot at the following VERY exciting prizes?

In addition to the top three prize winners to be selected by Epson’s judges, fans are also encouraged to vote for their favorite so that the highest voted photograph wins a “Voters’ Choice award.” The winner of this award will get USD200 and an Epson PictureMate PM310.

Every week, Epson’s judges will also pick the top 3 photos. The winners of the Top 3 photos of the week each gets SM gift certificates worth P1,000 and their photos automatically qualify for the final judging.

Now this is truly a great way to showcase the beauty of the Philippines by getting the youth involved as they share their inspiring images with a worldwide audience – thanks to Epson who has been running this contest for a while now.

So what are YOU waiting for? Go on Facebook and join the contest. Who knows? You might find yourself on a flight to Taipei very soon! I have a very valid passport by the way and can travel as your companion, anytime and anywhere.:)