…is just like any afternoon, except that, well…it’s with Neil Etheridge!

The international football player came face-to-face with some members of the media and selected bloggers during his official introduction as one of the elite members of the New POWERADE ION4 powerhouse cast of ambassadors.

For some very weird reason, the photos given to me won't load properly on WP so I had to make do with this amateur shot. So sorry!

Neil, who made a quick trip back to the Philippines for an upcoming game with the Philippine Azkals, was the perfect choice for the role of brand ambassador for POWERADE ION4 because of his talent, skills, and complete sportsmanship. If you guys have been following football, you would have heard that Neil made his historic debut at the Europa League recently – and if you haven’t, well, now you know.:)

“It’s a pleasure to be selected by POWERADE ION4 to be one of its ambassadors with fellow Filipino athletes. It’s always important to keep getting better. You have to keep trying to improve and be complete. Every single time you step on the field you want to be your best so I always choose the best equipment; the best, complete hydration partner. Hopefully with POWERADE ION4, I get to be one of the world’s best,” says Neil in a press statement. 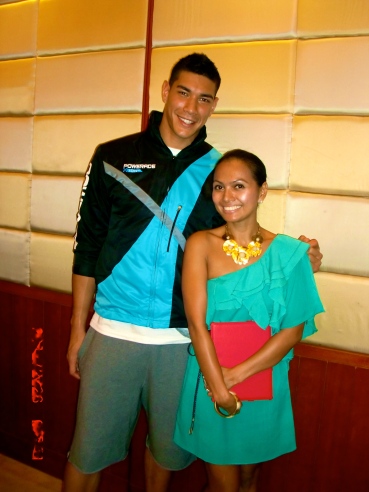 Okay, this is the part where I say 'Please don't judge me!' I really just wanted to see exactly how tall he is! Chos.:)

Fast facts on: What makes it the complete sports drink? While other sports drinks have two ions, new POWERADE ION4® helps replenish water and the four key electrolytes typically lost in sweat: sodium, potassium, calcium and magnesium and provide carbohydrate fuel for your muscles. POWERADE ION4® encourages the body to absorb fluid and maintain fluid balance. Carbohydrates are replaced as well, supplying your working muscles with fuel, helping you sustain mental and physical performance as you exercise. To help you fight off dehydration, POWERADE ION4®doesn’t switch your thirst receptors off prematurely. It keeps you feeling thirsty until you’re properly rehydrated.

Powerade Ion4 is available in Mountain Blast, Orange Burst and Silver Charge in the new easy-grip 500mL bottles. The Mountain Blast and Silver Charge variants are also available in sports caps, perfect for rehydrating during exercise. Powerade is a trusted partner of many sports organizations in the country and the world. In fact, it is the official hydration partner of the 2012 Olympic athletes in London.