There comes a time in your life when you stop thinking about your birthday and I think I ceased obsessing about mine a long time ago. In fact, my birthday is the last occasion I would look forward to with excitement – not even a speck of it. Last year, though, was different. It was romantic and special because at one point after our dinner, C got down on one knee and with tears glistening in his eyes, asked me to be his wife…and I said yes!

Before that, my birthdays have all just been a haze of billowing cigarette smoke, fun, sidestitch-inducing moments of hilarity, and fifty shades of drunkenness – but there was no singular moment that really stood out. I think, perhaps, age has a lot to do with it: this mellowing out. The wanting to just be with a few people you feel most comfortable with. People who allow you to just be.

And that’s how I celebrated my 33rd, cruising Palawan’s famous subterranean river national park (aka Palawan Underground River), named as one of the New 7 Natural Wonders of Nature early this year, with Atche Noel, Jay, and C. We had to wait for hours on end to get on the boat that would take us on a 1.2 kilometer river ride inside the cavernous cave, but it was well worth it! I told C that in a way, we’re truly blessed to have traveled to a few places together despite living miles apart and having individual careers to manage. C and I may be poles apart in a lot of ways (and I’m obviously not just talking about our complexion, accent, and passports), but if there’s one thing we both love to do, traveling would be it.

After our Underground River adventure, we wanted to see more of Puerto Princesa and so the four of us decided to go to Isla Pandan and just chill before boarding the 5:30pm flight back to Manila on Sunday. At this point, we were ever so glad that the sun actually came out after a gloomy Saturday on account of tropical depression Ferdie that submerged some parts of the country in floodwaters, so we happily sunbathed until it started drizzling again shortly after noon. I had wanted to try stand-up paddling but there were only two boards and they were unavailable at the time of my asking. 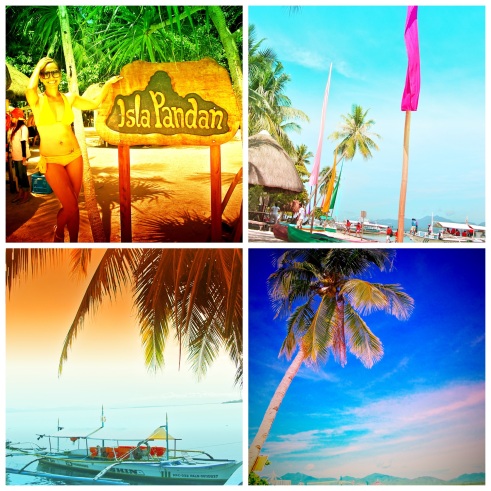 Once back in Manila, I immediately threw myself into work as there are about a million and one things to be done still before  we fly to Jakarta for our biggest annual event on September.

Palawan for my birthday wasn’t such a bad idea. I wish I were more relaxed, though, but it was quite tough because my mind was just running at top-speed, almost nonstop, thinking about work and projects still sitting on my plate. In any case, that doesn’t take away from the fact that I had great Palawan memories – Kalui’ being one of them. Food and ambience are top-notch in this famous Puerto Princesa restaurant, you’d be crazy not to pay a visit when you’re in town. Meanwhile, those looking for fun live band entertainment can opt to hie off to Tiki Bar, where incidentally I spent the eve of my birthday sipping red wine and trying to make sense of one of the showband girl’s bad singing.

So this is it. I’m 33, all-woman, and soon-to-be bride/wife to the most loving, patient, understanding, (and a few more things) man I have ever known. And oh, incidentally, with zits the size of Jupiter I would put any acne-sporting 13-year-old to shame. I’m surprised that C can still look at me adoringly and call me mon amour even with these unsightly marks on my face. This really must be love.