So, thanks, in no small part, to my current state of preoccupation I have not exactly been livin’ it up in many areas of my life. Well, apart from super fun trip to Bohol with C for his birthday, I haven’t done anything exciting or sexy lately. Unless you are just like me, someone who thinks work is sexy. At least I consider mine to be. Maybe because I am passionate about what I do and the many opportunities that are still to come. Just this afternoon, Kas and I were having a private conversation on Twitter about how our respective social lives have ceased to become social, so to speak. Mainly because we have not been doing any form of socialization unless it involves work. Like I said, the only places I ever see now are the interior of our office, the mall close by where I would often have my lunch, and my shoebox apartment. And lately, I have been going home late nights because of so many projects we need to deliver by September. And most of these projects are simply too big to fail, so there’s very little room for F-ups.

So anyway, Bohol. Perhaps one of our best trips together. Well, come to think of it, all of our travels have been nothing if not fantastic. It’s just that I realized that apart from the two trips we made to Boracay in 2010 and 2011, C has seen very little of our country. We travelled to Banaue and Baguio once with friends but it was one disastrous trip it hardly counts as an adventure.  In fact, he would always remind me of it whenever the subject my ‘travel planning skills’ would come up. Now I can safely say that Bohol became my redemption. It was also my first trip to the island so it was double fun for us!

We stayed at the beautiful Bohol Beach Club and I could not have chosen better, if you ask me. The resort was just perfect for what C and I needed – some privacy, good food, fun amenities, and a long stretch of white sand where we can run barefoot on. The resort staff were very nice and accommodating and everywhere you look there’s always someone sweeping the ground or picking up dried leaves. Bohol Beach Club is such an amazing place I recommend that you make it your first choice when planning a trip to Bohol.

Now one of my favorite places in the country, Bohol Beach Club!

We were only there for the weekend but we managed to do a lot of things and visit a lot of places. Thanks to our local guide recommended by Atche Noel. For 2,000, our local guide took us to the touristy places in Bohol and all things considered, I’d say it was well worth it!

1. Blood compact. Our first stop during the tour. This is supposedly the site where the then-Captain General Miguel Lopez de Legazpi entered into a blood compact with Datu Sikatuna to crystallize the friendly relations between the Spanish conquistadores and the natives sometime in the 1500’s. The site itself is really not much to look at as it was just there by the roadside and one could hardly call it a marvel. But I guess it’s what the stone sculpture of the Spaniards and Datu Sikatuna represents that merit some form of acknowledgment in this case. So, hooray for friendship and alliance! Much good it did us, ‘no?

2. Baclayon Church. Another colonial religious architecture dating back middle of the 16th century. The church interior has that kind of ornamentation that’s similar with a few other old stone churches still found in the Philippines. Although I think some of them failed to withstand the test of time and natural calamities but Baclayon Church, thankfully, is not one of those. There is a museum attached to the church but we did not go anymore because we rather pressed for time. I heard the museum itself is loaded with antiques and other beautiful art pieces, so looking back, it would have been nice if we made a pitstop there as well.

The interior is actually fascinating…and a bit sad. It carries a lot of history in it, for sure. 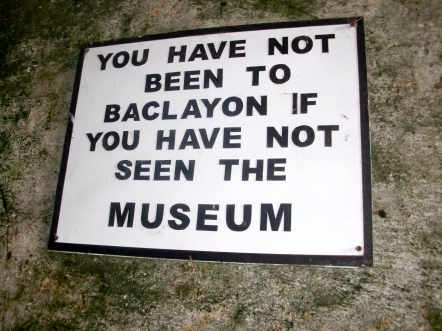 So there you go. I guess C and I have not ‘really’ been to Baclayon…

3. XZOOTIC Animal Park. For only P20 entrance fee, you get too see a few exotic animals such as the ostrich, civet cat, asian leopard, bear cat, monkey, porcupine, and the main attraction: the two pythons each weighing over 200kgs! If you’re feeling brave, you can have your photos taken with them inside the cage. Don’t worry, they’re fed well enough (two live chickens we were told) that they’re usually asleep or digesting during the day. Looking at those animals though, you’d somehow feel distressed because they are kept in such tiny cages you just know they feel very restricted and unhappy. 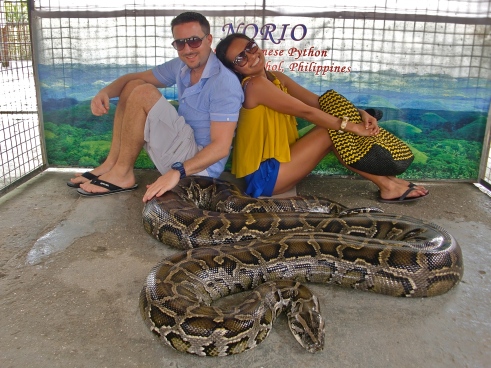 Norio the ginormous reptile. Caretaker told us he weighs about 203kgs. And no, i’m NOT that brave at all. It’s just that he’s sleeping, as you can see. If he were awake and hungry, I will be in another city or country, that’s for sure. LOL.

With Milo the Ostrich.

4. Loboc River Cruise. In truth, there was nothing exceptional about this part. Sure, it was relaxing to be on board a mid-sized boat while enjoying your lunch. Well, it would have been if only fellow passengers were not moving around too much taking photos of each other every two seconds and blocking your view in the process. Food was okay and for Php300 per head for the one hour river cruise with buffet, you could say it’s not that steep. At some point during the cruise, we made a pitstop so the young Boholanos can serenade us with folk songs and wow us with their folk dancing skills and dexterity. Oh, watch out for the waterfalls, too. And I mean REALLY keep your eyes peeled because it’s so tiny you’d miss it if you just blink. 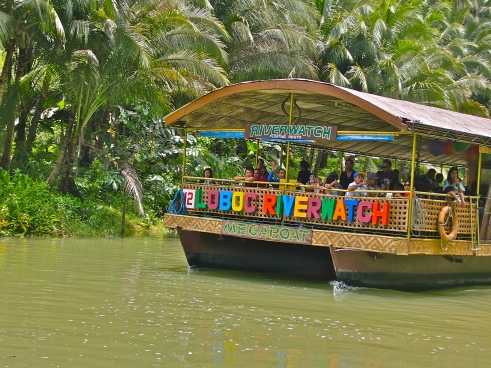 The Tinikling. I performed this once before in a school program back in the province where I came from. Ako na ang katutubo. LOL.

5. The TARSIER Conservation Area. Definitely one of the two highlights of our tour. Oh just to see those cute primates is already a fulfilling experience in itself! Too bad we are no longer allowed to get too close to them, much less pet them, because I really would have wanted to put them in my palm and just nuzzle their furry little bodies with my nose! The place itself is about three acres (according to the watchers) and it is home to 129 tarsiers, each one of them watched very closely by the caretakers – all of whom are ready to pounce on unruly visitors who would insist on taking photos with their camera flash on and/or touching the sleeping tarsiers. They’re nocturnal animals, by the way, so they’re sound asleep during the day. Although we saw one who was struggling mightily to sleep and he kept blinking his very big eyes until he finally tuned out the world. C was especially enamored by the tiny primates he wouldn’t stop gushing about the until after we left Bohol! 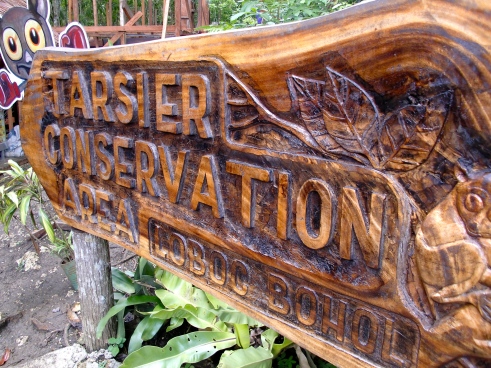 Home of the Tarsier.

The obligatory couple photo with the tarsier.:p

6. Man-made forest. What else can I say about this site except that it’s a forest made by, well, men. But seriously, the trees actually look pretty, slightly bent forward as they face each other so when you look at them from afar, they seem to form an umbrella giving shade to motorists and vehicles passing through. Nice place for photo op, too. 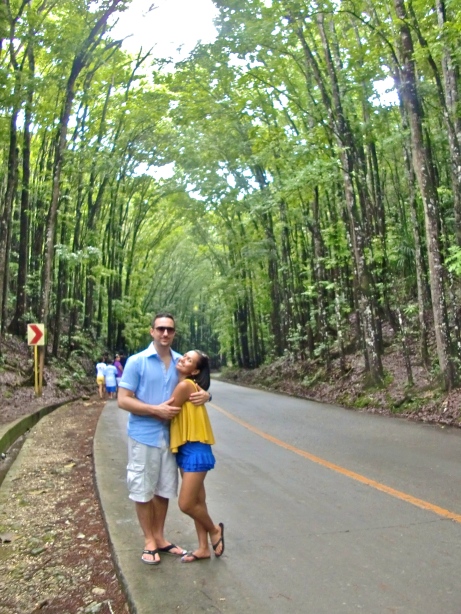 7. Chocolate Hills. Our second favorite part of the tour, next to the tarsier. What we found fascinating was the fact that these hills had actually been carved out from thin layers of corals and shell fragments as they were once submerged in water. As to why the nearly 1,300 mounds of earth were formed and shaped essentially the same is I suppose a happy accident. There’s also a wishing well at the viewing deck to which C and I made a coin donation each for our, uhrrrm, individual wishes. Oh, by the way, there’s some 200 steps you have to climb to get to the viewing deck, so I suggest you work on your cardio a little bit before you take the stairs.

The hills are alive with the sound of music… 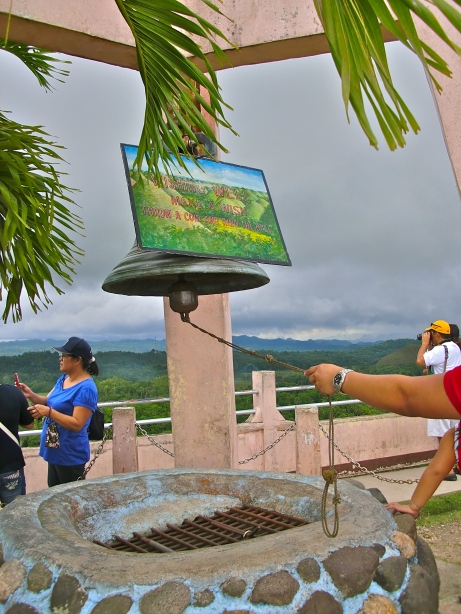 Make a wish, baby…And our love will make it come true…

The two things we failed to do while there were (1.) Visit and dine at the Bee Farm, and; (2.) See the dolphins. C’est dommage! We actually made arrangements for a boat ride to Virgin Island, a known sanctuary for the dolphins, on our last day in Bohol, but on that particular morning it rained heavily we decided not to risk it. Seeing the dolphins would have been a perfect way to cap our trip. Instead, we decided to run barefoot on the beach for half an hour once the sky cleared; avail of our complimentary kayak ride; and get one last massage by the beach before finally leaving the resort.

All in all, it was an awesome awesome awesome adventure and we loved every single moment of it! I guess we will just have to go to Apo island one day to see the dolphins. But that won’t be anytime soon because we have Palawan lined up…